Arising from a need to better understand how a person's health is influenced by all the different types of exposure they are subjected to during their lifetime, the exposome concept was introduced in 2005 by the British cancer epidemiologist Christopher Wild[1]. It takes into account exposure to chemical agents, found in both our environment and food sources; physical factors such as noise; biological factors via the microorganisms we are in contact with; as well as nutritional deficiencies during development and psycho-socio-economic factors such as stress and social disparities.

Research issues today focus on characterising the various facets of the exposome; measuring their effects on the emergence of human diseases, particularly cancer, neurodegenerative diseases or those of endocrine origin; studying possible interactions between exposome components or between the exposome and various biological parameters.

Interest in the exposome focuses on humans

So, in 2012, the US National Research Council broadened Wild's original definition by introducing the notion of surveillance and the integration of all the external and internal types of exposure we are subjected to throughout our lives. 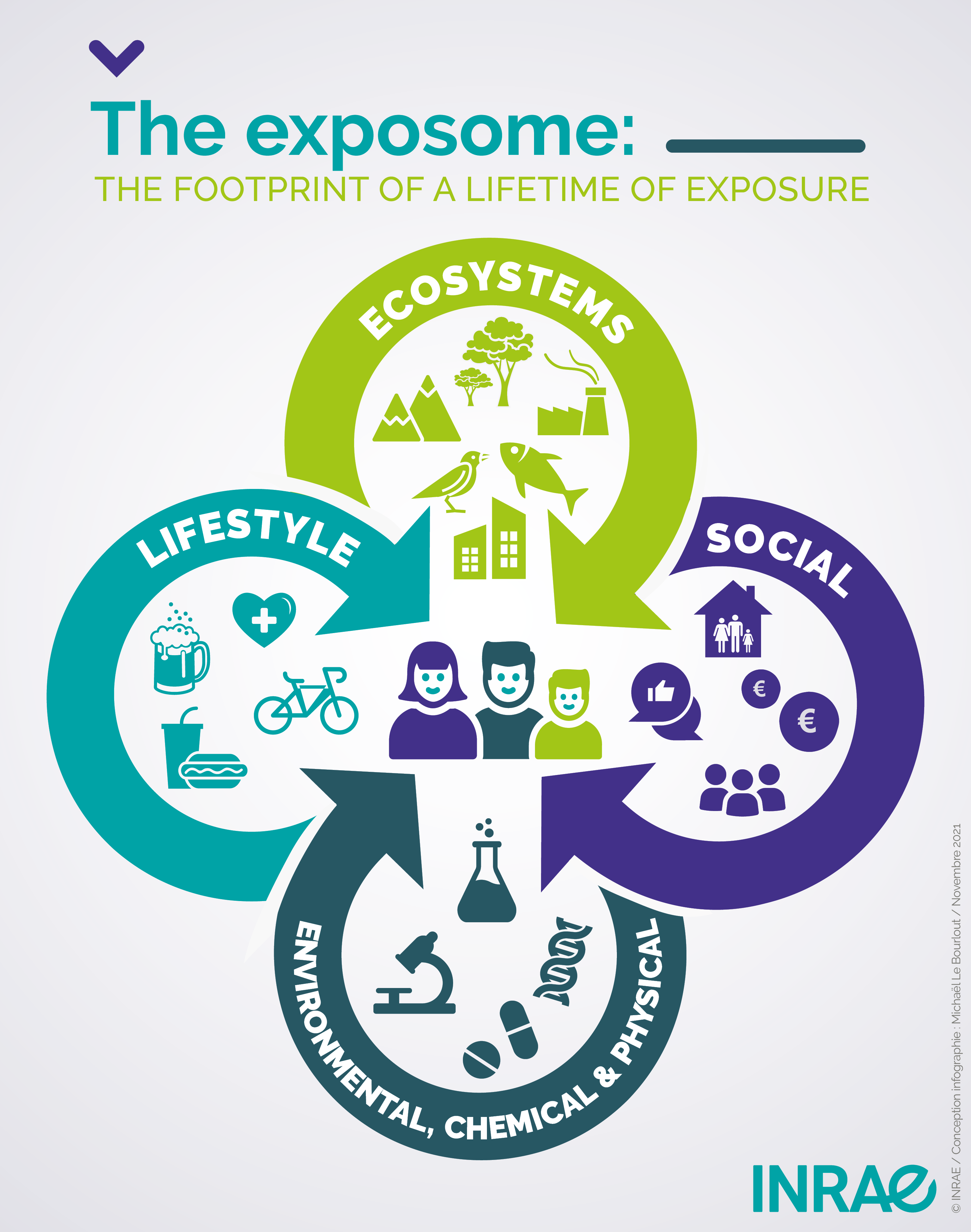 The chemical exposome: the spearhead of scientific progress

Research is currently best organised in regard to the "chemical exposome". Its borders are at the crossroads of many of society's concerns. Chemical pollution is, in fact, considered to be one of the major causes of disease and premature death[2]. Human populations' airborne and food-based exposure to pesticide residues, fine particles or natural contaminants such as mycotoxins and heavy metal has been proven.

Besides the need to determine the health impacts and prioritise the risks of such exposure, the challenge is to develop technologies that allow us to quantify and characterise them. Thanks to significant methodological improvements, it is now possible to move from a targeted to an untargeted approach in order to describe exposure to a whole set of contaminants, including when there is no obvious evidence of their presence. So, from human urine samples, using mass spectrometry or nuclear magnetic resonance (NMR), an "ID card" of various types of exposure can be generated during a single analysis, with the key advantage of a considerable gain in time. INRAE can now count on large-scale systems such as the TOXALIM (food toxicology) joint research unit's Metatoul-AXIOM (xenobiotics analysis, identification and metabolism) platform in Toulouse and the Laberca (Laboratory for the study of residues and contaminants in foodstuffs) joint research unit in Nantes. The Institute can also enjoy support from the French national MetaboHub facility. Managed in partnership with the CEA, CNRS, INSERM and several universities since 2013, MetaboHub offers research services in metabolomics and fluxomics at various levels from cells to populations. Finally, INRAE is also a partner of the "France Exposome" national research facility project led by INSERM and Oniris, which was just added to the French national research facilities roadmap.

As part of the One Health approach, analysing the levels of contaminants in the environment provides information on the level of risk for humans. In that regard, INRAE is involved in the Food Chain Surveillance platform. The challenge is then correlating exposure information for individuals and populations with health events so as to ultimately implement prevention activities by adopting strategies to limit exposure.

Characterising the population's  exposure to contaminants from our food systems, identifying related health effects and proposing  prevention mechanisms are objectives of the Food Systems and Human Health (SYALSA) metaprogramme which INRAE launched in 2020. Through their wide range of scientific expertise, the teams working for SYALSA can examine all pathways to exposure via foodstuffs, of course, but also air-borne contaminants as is the case with farmers' and nearby residents' exposure to pesticides. The programme's leaders are already looking farther ahead. This is only the first stage since including the impact of psychological and social stress is one of the metaprogramme's future goals.

SYALSA Metaprogramme: health as a springboard to improving our food systems

At the core of relationships between agriculture, food and the environment, health issues can be a driving force behind major changes to food systems.  SYALSA's overall goal is to identify and assess those means for action that are likely to make food systems more favorable to human health, through both the food they produce and their effects on the environment, by taking into account shared benefits for health and the environment.

This metaprogramme is re-examining the entire food system: from cattle farming, for example, to meat processing through to consumers.

A total of 20 proposals were selected as part of the first call for expressions of interest designed to develop exploratory projects and interdisciplinary consortiums. One of those selected, the "C-Agri-Impact" project looks at exposure to airborne contaminants.

From an exposome to an eco-exposome

And yet, the example of endocrine disruptors, where studies on wild fauna greatly contributed to revealing their impact, demonstrates the value of applying the exposome concept to non-human organisms. Work on the eco-exposome makes it possible to provide information that is useful not only for analysing the effects of pollution on biodiversity and ecosystems but also from a public health perspective.

Like the measures taken for humans, testing mainly targets the existence of pesticides or POPs (persistent organic pollutants) such as dioxins, polychlorobiphenyls (PCB) or per- and polyfluorinated alkyl substances (PFAS). Characterising the types of pollution; quantifying exposure to the contaminants found, often at trace levels in the air, water, soil, foodstuffs; qualifying dangers for health at all life stages and for biodiversity; anticipating and managing the risks such exposure presents are all new issues which the scientific community needs to address.

From the study of contaminants to One Health

Characterisation of human exposure to contaminants benefits from the long experience of INRAE's units. Through the use of biomarkers, the TOXALIM unit in Toulouse revealed the toxicity of bisphenol A. More recently, the same unit demonstrated that titanium dioxide, a food additive, crosses the placental and brain barriers. In both cases, their findings led to changes in legislation.

Such toxicity studies need to be cross-referenced with epidemiological studies based on cohorts of several hundred or even thousands of subjects in order to monitor exposure and assess the effect it has on health.

INRAE has included in its INRAE2030 strategic plan the acquisition of more in-depth knowledge about individual and population chemical and xenobiotic contaminant exposure from food systems in the broad sense. This priority is part of INRAE's more general framework of actions on One Health.

[1] in an article entitled "Complementing the genome with an 'exposome': the outstanding challenge of environmental exposure measurement in molecular epidemiology"

Titanium dioxide: evidence of its toxicity

The use of titanium dioxide (E171) has just been banned as a food additive following a change in the regulation of the European Commission published on 18 January 2022, with a 6-month period for its implementation. This decision follows on from the expert report of the European Food Safety Authority (EFSA) concluding in an opinion published on 6 May 2021 that E171 could no longer be considered safe when used as a food additive. This opinion was based in particular on pioneering research conducted by an INRAE team (Toxalim Occitanie-Toulouse). Below is an overview of INRAE research on the toxic effects of E171.

Three questions for a start-up: Biomae

On-site biotesting to measure contamination levels, assess the toxicity of micropollutants and monitor water quality and aquatic habitats is now a reality in France thanks to Biomae, a start-up that grew and flourished in the IRSTEA (now INRAE) labs. The star of this success story is a tiny freshwater crustacean, the scud. We find out more from Guillaume Jubeaux, co-director of Biomae.

Environmental doses of Bisphenol S, a structural analogue of Bisphenol A which it has replaced in many everyday products, are sufficient to alter the developmental capacities of oocytes and embryos in ewes.