"The work has been thrilling!

"The work has been thrilling! The last 20 years have flown by,” says Olivier Andréoletti, a veterinarian and pathologist who joined the team early on, in the late 1990s, "We were exhilarated by the possibilities: the research slate was blank." Human Rezaei, a biophysicist, continues, "Starting from zero, we worked together to define concepts and create tools that we could use to better understand prion diseases." A geneticist focused on in vivo models, Jean-Luc Vilotte finishes, "And we always had complete trust in each other." Even as they receive this award, which recognises fundamental research with crucial societal impacts, the scientists will not rest on their laurels because so much remains to be done. "The concepts and tools we have developed for prion diseases can help researchers take a new look at other diseases that are caused by protein accumulation in the brain, such as Alzheimer's or Parkinson's," explains Vincent Béringue, a biochemist.

What was this new pathogen, which was neither a parasite nor a micro-organism?

Impossible! Indeed, the situation seemed impossible in March 1996 when the "mad cow” crisis turned the spotlight on a rare disease that can be transmitted to humans via contaminated food. Mad cow disease, also known as bovine spongiform encephalopathy (BSE), causes an uncommon and incurable disease in humans known as variant Creutzfeldt-Jakob disease (vCJD). It is part of the same disease group as classical Creutzfeldt-Jakob disease, which was first described in 1920. During the peak of the mad cow crisis, more than 12,000 cases of BSE were declared per month in the UK, the most severely affected nation. The crisis resulted in a series of economic consequences: herds of livestock were slaughtered, the European Union placed an embargo on UK-produced beef, consumers developed a long-lasting mistrust of the food industry, and the ability of the EU to ensure food safety and security was called into question. The ability of BSE to move from cattle to humans raised suspicions about other TSEs, like scrapie in sheep and goats. Scientists were confronted with a barrage of questions: what was this new pathogen, which was neither a parasite nor a micro-organism? It was a prion, a type of protein naturally found in humans and other mammals. Prions are misfolded versions of a common protein, but this structural difference can render them pathogenic, allowing the "contamination" to spread among neighboring proteins. But how? And how quickly? What are the mechanisms and pathways? What can be done to prevent prion diseases?

When the task force was formed, nothing was known, and, as Human Rezaei reminds us, “Even today, no hypothesis is off the table when working on prions." Since its beginnings, the group has worked to eradicate prion diseases in livestock and to reduce the risk of their occurrence in humans, where infections are linked to contaminated food or medical procedures involving infected tissue. Six million euros of public and private funding will be invested in this work, which will allow the group to acquire greater expertise and international visibility in the field of prion research, as well as to train the next generation of scientists. Thirty EU-funded projects are being established in collaboration with more than 30 labs outside of France. Rezaei explains, "INRA has committed itself fully to ensuring that advances are made at all levels, from the lab to the field." This research is also helping to inform public policy and has contributed to more than 150 sets of recommendations issued by French, European, and international health agencies.

A panoply of prions

Taking a new look at Alzheimer's and Parkinson's disease

On an INRA experimental farm in Toulouse, a herd of sheep naturally infected by scrapie in the 1990s provided the researchers with an unprecedented tool for studying TSEs in a natural host. In turn, animal genetics laboratories in Toulouse managed to decipher the genetic determinants of scrapie resistance in sheep. "Thanks to these discoveries,” comments Jean-Michel Elsen, who headed the research efforts, "nearly 1 million sheep were genotyped for the prion protein gene, PRNP. The information gleaned was used to restructure breeding programmes at the national scale, in collaboration with IDELE* and the sheep breeding industry. An EU-scale programme was then developed." As a result, the incidence of scrapie in French livestock has fallen drastically over the past 15 years. Furthermore, a highly vulnerable sheep breed in the Pyrenees (the red-headed Manex) has been saved.

In tandem, in vivo animal models were used in the laboratory to study the prions causing TSEs in humans and other animals, which included characterising their pathogenicity. "In contrast to viral infections, it only takes one or two prions to cause disease, although the process can take 50 to 60 years in humans,” comment Vilotte and Béringue, "Thanks to our models, we have been able to reproduce disease development but on an accelerated scale." Since 2001, the task force has published more than 300 articles on prion diversity and infection dynamics, the tissues at greatest risk, and transmission among species.

The risk of food-related transmission has significantly declined in the cattle, sheep, and goat industries thanks to the implementation of drastic health and safety measures. However, it is very likely that there remain asymptomatic carriers of vCJD (e.g., 1/20,000 in France). Furthermore, every two days in France, someone develops inherited or sporadic CJD. Very early on, hospitals put into place very strict measures for preventing the transmission of prion diseases via blood transfusions, hormone** treatments, or contaminated surgical instruments. As a result of its numerous collaborations, INRA has developed innovative methods for detecting BSE and vCJD prions and for evaluating transmission risks. These methods involve animal models, rapid assessment tests that do not require animal cells, and detection kits.

This research can thus inform our understanding of Alzheimer's and Parkinson's disease.

In 2016, TSEs emerged in cervids in Scandinavia and dromedaries in North Africa. INRA researchers jumped back into action. They identified the prion types responsible for the diseases as well as the tissues at risk, notably those of the nervous system, lymphatic system, and urinary tract (in the case of the cervids). Certain questions crop up every time a new TSE is identified: are these prions dangerous for humans? "They all are a bit dangerous...the species barrier is breaking down between humans and animals,” remark the scientists, whose work espouses the One Health approach, which recognises the connections among animal health, human health, and the environment. This research can thus inform our understanding of Alzheimer's and Parkinson's disease.

Its five scientific spokespeople are

The following research teams are involved: 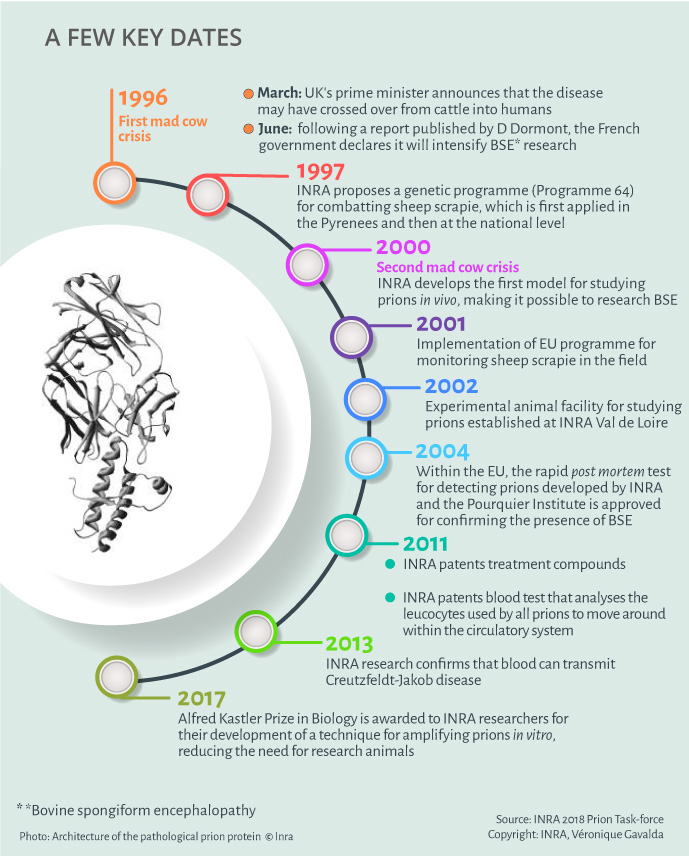 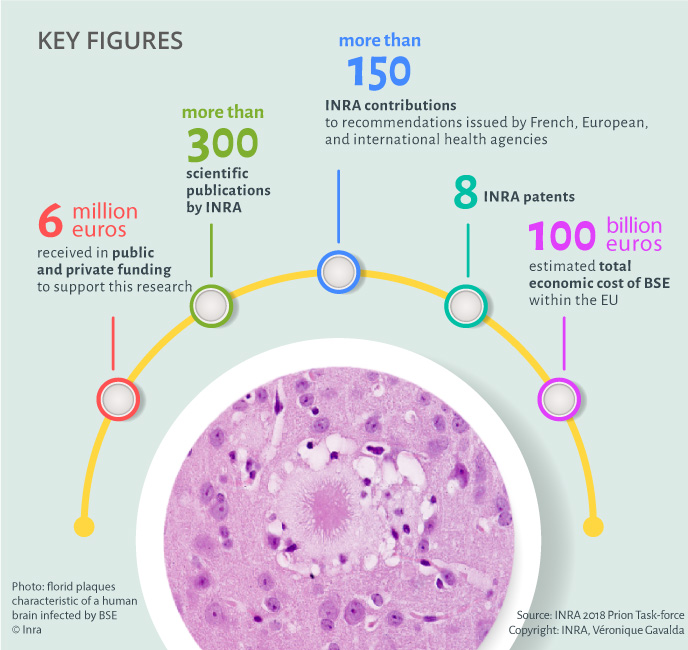 Soils for food security and the climate

The "4 parts per 1000" initiative proposes to increase organic matter contents and encourage carbon sequestration in soils, through the application of appropriate farming and forestry practices.

The Joint Programming Initiative on Agriculture, Food Security and Climate Change (FACCE-JPI) has published its new brochure and a flyer on soil management in the context of climate change mitigation. The brochure presents the achievements and future actions of FACCE-JPI and includes several key interviews. The flyer highlights some of the research projects that are part of the 'FACCE-JPI Multi-Partner Call on Agricultural Greenhouse Gas Research'. Both documents were presented at the International Conference on Agricultural GHG Emissions and Food Security organised by GRA and FACCE-JPI in Berlin (10-13 September 2018).

Rut Carballido-López is the winner of a 2017 Consolidator Grant from the European Research Council (ERC). The award will provide 1.9 million euros to fund her team’s research on the morphogenesis of bacteria, and ultimately to open up new doors to finding different modes of action for antibiotics.